5 Throwback Cars That Should Make a Return This Summer

It seems that every list of discontinued cars that are “worthy of return” tends to rely mostly on statistics and insider stories about the manufacturer.

Well, our list relies on a little bit of heart. And, of course, the fact that the vehicle actually had a large enough production run that you’ve actually seen it on the road once upon a time. Here are five throwback cars we’re hoping make a comeback for summer 2018!

In the late 80s, the comparatively sleek, tight lines of the Ford Probe were turned heads across North America. Customers conditioned to grim resignation about the worsening iterations of the ailing Mustang lineup were astounded to see the Probe in Ford dealership lots.

The car’s slick look was wrapped around a saucy bit of Mazda front wheel-drive engineering, introducing die-hard Ford fanatics to the possibility that Detroit didn’t have every answer. While purists immediately rejected the front-wheel drive, everyone else hopped in the driver’s seat and took it for a peppy spin around the block. The excellent braking and lighter weight of later models increased the appeal of the driving experience.

By the mid-90s, the Probe was a suburban status marker and its GT model delivered a reasonably priced sports car for the everyman and woman. If the return of a modern Probe matched the same genre-defining price, speed and aesthetic leadership, it would fly out of Ford’s dealerships again.

>>> Qualify for your ride instantly at Mac James <<<

Even Burt Reynolds in his black Trans Am (the top-end model of the Firebird) was worthy of song and legend. The Firebird was an icon. With a nonchalantly aggressive slide of the hood into the front bumper, the devil-may-care back end, and a ridiculously massive door, the design demanded a devoted following.

Few models of car have such an instantly recognizable buyer, drawn in by the mystique and performance. Eventually, the Pontiac badge was retired by GM, but for every internet rumour of a Pontiac rebirth, there is a dedicated Firebird fanatic fanning the flames of undying love.

The Wagoneer is the OG SUV for families and people who want it all in a single vehicle.

There isn’t a 5- or 7-seater 4×4 on the highway today that doesn’t owe something to this early off-roading pioneer. It wasn’t always an easy start to the cross-over mashup of multiple expectations, but without the Wagoneer there would be no market dominating segment like the SUV of 2018.

This was one of Chevy’s earliest (amd rather unique) take on an SUV. Rather than trying to combine different kinds of driving capabilities, the El Camino dared drivers to combine cargo carrying needs.

There’s a faintly damning quote about its design origins that says it all when describing the inspiration of the El Camino, “…as a result of a 1932 letter from the wife of a farmer in Victoria, Australia, asking for “a vehicle to go to church in on a Sunday and which can carry our pigs to market on Mondays”.

Who wouldn’t want that type of versatility in 2018? 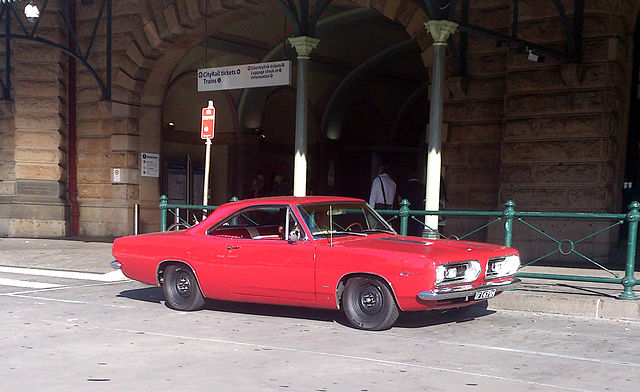 Like so many muscle cars of its time, the Barracuda had a throaty growl that reverberated all the way the quilted vinyl bench of a back seat. Broad of beam, steady in flight, the first and second generation (64-69) Barracuda turned heads, while it drew steadily on the tank and accelerated from the green light. The heavily-redesigned third generation and every model following  (‘70 – ‘74) simply dominated the lane.

Eventually, however, the big block engine succumbed to fuel emission standards and performance dwindled. Chrysler has brought out vaguely reminiscent designs like the 300 in the past decade, but they’ve never again scaled the muscle car heights like they did with the ‘Cuda.

It set up the game, and then proceeded to dominate the minivan segment of the market for years to come.

The Dodge Grand Caravan has been a perennial best seller due to exceptional design focused on delivering a family vehicle perfect for urban life. Minivans changed how car owners viewed family driving and they haven’t released their grip on the market since. The Dodge Grand Caravan is an all-time favourite for all the right reasons.

Mac James Motors might not have all these old-time classics in stock, but we definitely still have a lot of winners that are ready to be driven off the lot today.

The best part? We can get you approved for your loan right away.