Can You Outsmart the Shady Car Salesman?

Ever gone to a used car lot and spotted a salesman you knew was up to no good? His polyester plaid suit is creased in all the wrong places and his slicked back, greasy hair shines brighter than the painfully obnoxious gold fillings in his mouth.

He’s leaning against his desk at the far end of the dealership, but his eyes narrow as you enter his line of vision. His mouth widens into a skeezy grin as he saunters over to you.

“Well, well, well, what have we got here? Ready for a new car, folks?”

He leans over to shake your hand and his strong musky cologne overpowers your nose. You flinch, unconsciously.

The battle of the wits has already begun. Mr. Salesman is about to take you on a trip through his well-planned pitch, filled with intimidation tactics, guilt traps and careening plummets into sketchy sales deals that you won’t be able to back out of. 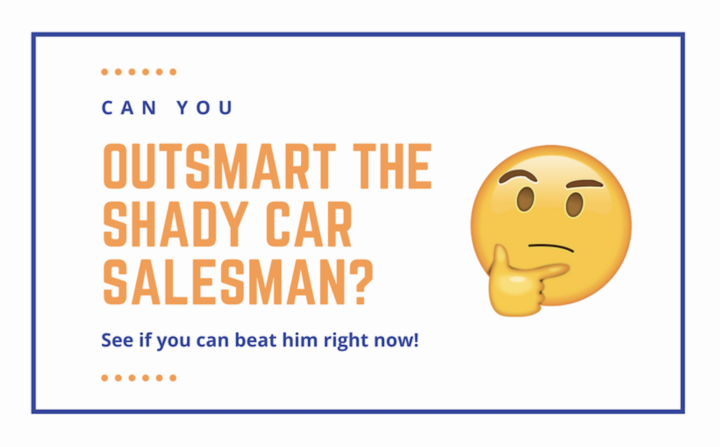 First, he’ll inflate the price so that he can ‘give you a blowout deal’. He knows most of his shoppers will be price conscious so he’ll take a car worth $8000, give it a new tag of $15,000…and then draw a big red line through it. After that, he’ll write “$8,200” under the crossed-out markup and stick a flag on its antenna that reads “Price Just Reduced!”

As he leads you around to a car you’re potentially considering, you’re going to start having some questions.

Did that scratch come from a previous collision? Mr.Salesman suddenly has a phone call to attend to – he’ll be right back.

What’s that smell? Mr. Salesman takes an exaggerated sniff tour of the car – “What smell? Must be the dirty air in our city today… Speaking of dirty air, did you know there was a time-” and launches into a story that will distract you.

How’s the mileage on this one? “Well you see, when I picked it up for an extended test drive, it looked like a real contender with its six speed transmission, start-stop technology, a one-litre, three cylinder engine with direct fuel injection, a variable-pressure oil pump and a turbocharger… *continues speaking technically at three times the speed*… ”

Ever since you walked onto the lot, Mr. Salesman has been taking you apart in his head, one judgement at a time. If he thinks you don’t know much about cars, get ready for an overwhelming wave of technical information that’s about to wash you away.

In a rush? Oh, he totally understands – he just has to speak to his Manager about something for half an hour. And tie his shoe. And get a drink of water. The lower your patience, the better for him.

After two hours of an exhausting mental battle with Mr. Salesman, you’re showing signs of wear. You just want to take your car and go home.

“What can I do to get you in this car today?” he’ll ask finally, spreading his arms open in a gesture of mock-defeat. “I’ll even throw on a discounted warrantee on this baby for ya.”

Will you give in? Have you escaped with your wallet unscathed?

We hate greasy sales people too, so our team is going to give you some training to prepare you for what’s out there. Find out if you really have what it takes to survive sketchy car lots by answering the following questions.

It’s time to see if you can outsmart the Shady Car Salesman.