Driverless Cars: When Are They Coming to Edmonton?

Remember how proud you were when you bought your first car?

Remember how it felt to turn the key in the ignition and taste freedom for the first time?

In about 8 years, new drivers won’t be feeling the same. In fact, by 2025, the majority of people probably won’t even want to own a car. Consulting experts like Nickolaus Laung of the BCG’s Centre for Digital in Automotive, expect that by 2030 most of us are likely to just be ‘controlling passengers’ in our private self-driving cars.

Trigger some anxiety? We understand. Maybe you should amp up your ride and enjoy it while you still can.

Whatever your feelings about driverless cars may be, some of the most significant impacts of autonomous vehicles (AVs) will first be seen in the areas of urban mobility and public transportation.

“AVs will enable new service configurations where consumers are delivered door to door with virtually no stops in a comfortable vehicle, with just one to three other passengers,” says Stan Boland, CEO of FiveAI – a company that builds AI-based software for AVs and one of the leaders in testing AVs in the UK in 2017.

In the next few years, public transit has the potential to reach new levels of speed and efficiency, a blessing for commuters and city planners alike.

However, these automotive changes will not only offer increases in convenience and comfort, but also in overall road safety, while reducing pollution and waste. Drunk driving in Canada continues to be a leading cause of crashes despite the increased legislation on fines, driver suspensions, and possible jail time. Even worse, population surveys show the number of Canadians driving after using drugs is also on the rise. Survey data from a 2013 Centre for Addiction and Mental Health report showed that, among Ontario drivers as young as high schoolers, 4% per cent drove after drinking while 9.7% drove after smoking cannabis.

These statistical trends give reason for worry.

AVs have the potential to completely eliminate human error from the dangers of driving. The number of injuries and fatalities each year could be drastically reduced.

We just need to make sure these driverless cars are well developed and thoroughly tested. This is where Edmonton comes into the equation.

The UK isn’t the only place where AV development is happening. The City of Edmonton is trying to lay the groundwork to be North America’s leader in the testing and development of urban autonomous vehicles.

The Edmonton City Council’s Urban Planning Committee was informed that the closest and quickest achievable market lies in AV trucks. A test track was then proposed for the University of Alberta’s South Campus to evaluate driverless “light duty shuttles” (12 passenger busses), followed by the recent approval of three three new staff hires to the city council, and $325,000 to the U of A project. 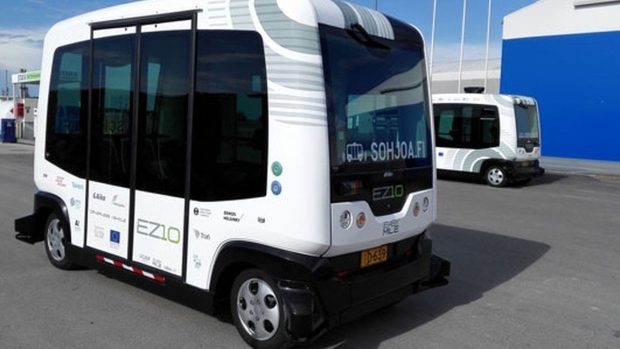 Although a few of these trucks are already being tested in Finland and Nevada, the advantage of testing in a Canadian city lies in our blustery, winter weather. We’ll be able to throw all kinds of road conditions into the mix; if an AV works in Edmonton, it’ll be effective in most places around the world.

The Alberta Motor Transportation Association (AMTA) recently invested in 20 acres of land near the Edmonton International Airport with plans to create an international driver training centre. Dan Duckering, a member of the AMTA Executive Board, says that the testing of self-driving trucks could very well be a part of that. “The technology hasn’t been tested in extreme weather and that’s what Edmonton can capitalize on. This is not about replacing people with technology, but rather about creating jobs in this growing field,” Duckering added.

The economic benefits are also difficult to ignore.

“It’s a billion-dollar opportunity if we choose to play in this sector,” says Brad Ferguson, President and CEO of the Edmonton Economic Development Corporation (EEDC).

Investing in the growth of autonomous vehicles would not only nurture local expertise, but put Edmonton on the map of the future.

Race to the (Driverless) Future

Although we’re finally making progress, Edmontonians can’t be caught dragging their feet in the field for too much longer.

“Four years ago was probably the best time to be a test city. It’s an uphill struggle now on this one,” said Paul Godsmark, with the Canadian Automated Vehicles Centre of Excellence, during an urban planning committee debate in mid-June.

In fact, our neighbour city, Calgary, has already caught on and is quickly igniting the well-known inter-city rivalry.

Five Calgary councillors recently signed a motion asking their city administration to join the Calgary Economic Development and conduct research on the benefits of AV testing on their streets. The motion requested that if research proves it to be beneficial, the city administration ask the Alberta government for legislation allowing autonomous vehicles to drive legally in Calgary.

As of June 26, 2017, the motion was unanimously approved by the Calgary City Council. A report is scheduled to return by the end of the year.

Join the Wave of Self-Driving Vehicles

Autonomous vehicles will play a huge part in the next few decades, regardless of how we feel about them right now. A recent survey of 300 Albertans by the Canadian Automobile Association reported that the majority of our province is still vastly unaware and wary of driverless cars. If we choose to ignore this inevitable future and choose to remain uninformed, it could be our loss.

Jeff Kasbric, Vice President of Government Relations with the Alberta Motor Association (AMA) says that the AMA strongly supports the work in becoming a northern research hub, “but the overall distrust of (the cars) is higher here than the rest of Canada. We must be aware these are not the cars of the Jetsons and their integration is sooner than many appreciate.”

It’s our responsibility to stay on the ball; let’s put Edmonton on the global map for innovation.

While informing yourself on the ins and outs and hands-free nature of autonomous vehicles, you also have an opportunity to find out which car you should be driving today (while you still can) based on your personality.